Pompey's Pillar is a Roman triumphal column in Alexandria, Egypt, and the largest of its type constructed outside the imperial capitals of Rome and Constantinople. The only known free-standing column in Roman Egypt which was not composed of drums, it is one of the largest ancient monoliths and one of the largest monolithic columns ever erected. The monolithic column shaft measures 67 feet (20.46 meters) in height with a diameter of almost 8 feet (2.71 meters) at its base. The weight of this single piece of red Aswan granite is estimated at 285 tons. When you include the base and capital, it is 88 feet (26.85) tall, just over half the width of a football field or 12 stories high. In the middle ages the Crusaders mistakenly believed that the ashes, or the remains, of the great Roman general Pompey were in a pot at the top of the column. Thus today it is called “Pompey's Pillar”. Erroneously dated to the time of Pompey, the Corinthian column was actually built in 297 CE, commemorating the victory of Roman emperor Diocletian over an Alexandrian revolt. The size and weight of the column (it is really huge up close) is probably the reason it has been preserved from antiquity.

Base of Pompey's Pillar. Alexandria, Egypt

Base of Pompey's Pillar. Alexandria, Egypt

Although most of the area surrounding the column is unrecognizable rubble, there are remnants of a Roman bath and piscina. A piscina is a shallow basin placed near the altar of a church, or in the vestry or sacristy, used for washing the communion vessels. The sacrarium is the drain itself. Anglicans usually refer to the basin, calling it a piscina. Roman Catholics usually refer to the drain, and by extension, the basin, as the sacrarium.

View of Ruins of Staircase to the Serapeum. Alexandria, Egypt

Around the commemorative Column of Diocletian (Pompey's Pillar) there are the remains of the Serapeum (Arabic name, Amoud el-Sawari, Column of the Horsemen), or temple of the God Serapis, now badly damaged. It was built during the reigns of Ptolemy II (309-246 BC) and Ptolemy III (246–222 BC), but was damaged due to the revolts of the Jewish population in Alexandria, during the reign of the Emperor Trajan (89-118 CE). It was rebuilt again during the reign of Hadrian (117-137 CE). In 389 CE, a Christian mob led by the Patriarch Theophilus of Alexandria destroyed the Alexandrian Serapeum, but the cult survived until all forms of pagan religion were suppressed under Theodosius I in 391 CE. The temple consisted mainly of a high platform accessed by a staircase of 100 steps. Once the site of an ancient Egyptian village called Rhakotis, the area became known during Ptolemaic times as the “Alexandria Acropolis.” At the bottom, the Egyptian authorities have placed a number of artifacts from the temple in a little “garden”.

Under Ptolemy Soter (367-283 BC), efforts were made to integrate Egyptian religion with that of their Macedonian rulers. Ptolemy's policy was to find a deity that would win the reverence of both groups, despite the curses of the Egyptian priests against the gods of the previous Persian foreign rulers. The Greeks had little respect for animal-headed figures, so a Greek-style anthropomorphic statue was chosen as the idol, and proclaimed as the equivalent of the highly popular Apis (a bull diety from Memphis). It was named Aser-hapi (i.e. Osiris-Apis), which became Serapis, and was said to be Osiris in full, rather than just his Ka (life force). Though Ptolemy I may have created the cult of Sarapis and endorsed him as a patron of the Ptolemaic dynasty and Alexandria, Syncretism among Greek gods was a common practice, and there was already precedent for combining the Egyptian gods into one. Apis, the bull, was regarded as the incarnation of Osiris, and Osiris was sometimes called “the bull of the west.” Indeed, the practice of combining the two names occured before Ptolemy: “Osirapis” was worshipped in Memphis and perhaps already in Alexandria. Sarapis was a pre-existing merger of deities derived from the worship of the Egyptian Osiris and Apis (Osiris + Apis = Oserapis/Sarapis) and also gained attributes from other deities, such as underworld powers linked to the Greek Hades and Demeter, and benevolence linked to Dionysus. In fact, a Babylonian God of a similar name (the two headed god Enki, see my post) was consulted at the scene of the death of Alexander the Great.

In 1895, a black diorite statue representing Serapis in his Apis bull incarnation with the sun-disk between his horns was found at the site, an inscription dates it to the reign of Hadrian (117-38). Hadrian and his lover Antinous visited the Serapeum, where hundreds of Sacred Apis Bulls were entombed, during their tour of Egypt in 130 CE. It was perhaps then that Hadrian commissioned the above statue. On their journey up the Nile, they stopped at Hermopolis Magna, the primary shrine to the god Thoth. It was shortly after this, in October of 130 CE, around the time of the festival of Osiris, that Antinous fell into the river and died, probably from drowning. Hadrian was devastated by the death of Antinous, and in Egypt, the local priesthood immediately deified Antinous by identifying him with Osiris (and thus Apsis and Serapis) due to the manner of his death. A short-lived cult emerged with Antonious as a god, promoted by Hadrian.

Sphinx at the Serapeum

Reconstruction of the Sphinxes at the Serapeum

On the hilltop with the column are these two sphinxes, they were part of three (or more) in the original (or rebuilt) temple complex. These two were erected by Ptolomy 4th or 6th. There was another black granite sphinx with a missing head, dating to the Homohab of the18th dynasty. Nearby are subterranean galleries where the sacred Apis bulls were buried, and the three sphinxes. These sphinxes actually date to an earlier period of the temple complex and were excavated from the southern part of the complex and only later moved near Diocletian's Column. During the excavations of Alexandria at the dawn of the twentieth century, this pair of pink granite sphinxes were discovered. The original placement of the sphinxes are unknown due to the large number of new constructions at Alexandria from the Ptolemaic through Roman periods and the eventual destruction of the temple at the hands of the Christians; “the site’s decimation over time was such that when Alan Rowe explored it in early 1940s, he relied mostly on foundation deposits and traces cut in the bedrock to suggest the original plan of Ptolemy III’s Serapeum and Ptolemy IV’s temple of Harpocrates. Alexandria’s Egyptian elements, particularly the statues of priests, could mean that the sphinxes were originally erected there and would reflect early Ptolemaic efforts to develop relations with the native clergy.” 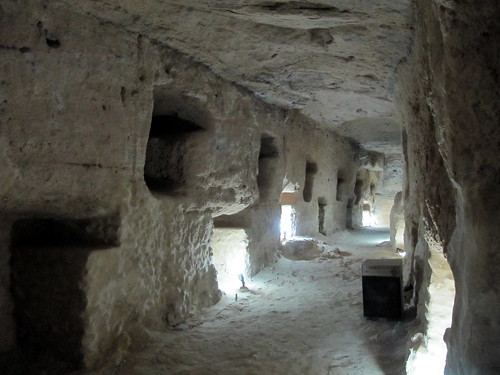 Underground Access to Underground from the Base of the Temple Mount. Pompey's Pillar. Alexandria, Egypt

The Serapeum also housed an underground library, contemporary or an annex to the ancient library of Alexandria. Apparently, some books were stored here which escaped the destruction of the main Library of Alexandria. This crypt-like structure, approximately 75 meters in length, running beneath the grounds of Pompey’s pillar, is still well-preserved, with niches in the walls once reserved for papyri scrolls. The library is accessed from a staircase leading from the top of the hill to the lower-level ground. There appear to be other corridors with access on the other side of the temple, both above, on the temple mound, and below.

There are a fair number of columns, capitals and other fragments that presumably are related to the site in addition to some sculptures.

These two human statues were brought by Cleopatra the 7th (of Anthony and Cleopatra fame) to decorate the Serapis temple. The left one is made of rose granite and belongs to Ebsmatik, the founder of the 26th dynasty. It shows the king kneeling while the upper part of the statue is missing. On the back and the base of this statue is a hieroglyphic inscription with the name of Ebsmatik. The statue on the right is also made of rose granite and represents Ramses the II. He sits on his throne holding a haka-scepter in one hand and in missing other, the nekhekh or flail. His head is missing and on the base of the statue we find both names of Ramses – wser ma'at ra step en ra, ra mes su.

These appear to be a Serekhs or Horus name of some pharoah. The earliest pharoahs, the “Followers of Horus”, ruled with this Horus name alone. In the Early Dynastic Period, the perched falcon of Horus was part of the name of the king. King Aha, for instance, was “Horus-Aha”, or “Horus who fights”. In the New Kingdom, “Mighty Bull” was added at the beginning of the name, but it was usually quite variable. Although it would continue to be used throughout the entire Ancient Egyptian history, it lost its importance to the prenomen and nomen from the end of the Old Kingdom on. This name was not the birth name of the king, but it was given to him when he ascended the throne. During the Early Dynastic Period and the early Old Kingdom, it was the king’s official name. His name of birth would not appear in official documents.

These stones bear the cartouche of Ramses II and must have been moved here at some point. On two of them are the full prenomen and nomen of Ramses II.

The site of the Alexandria Acropolis also features a “Nilometer.” By means of the Shidia canal, which connected the Nile River to Lake Mariut, the Nilometer was used for measuring the height of the Nile during each flooding season. A Nilometer was a structure for measuring the Nile River's clarity and water level during the annual flood season. It was a step-like structure that measured how high the flood would be. If it was low, there would be famine. If it was too high, it would be destructive. There was a specific mark that indicated how high the flood should be if the fields were to get good soil.