When we visited the Sea Life Sydney Aquarium we got to see not only small tropica fish but also large schools of the much larger fish due to the grand scale of the facility. Approximately half of the aquarium’s visitors come from overseas, and they’ve been flooding in since the complex opened in 1988. Many visitors come to see creatures that they have never seen before, such a platypuses and dugongs. In general, the exhibits that can be found at the Sydney Aquarium revolve around Australian themes, and the exhibit areas mostly pertain to different Australian regions and habitats. Some of the displays are housed in the main exhibit hall and others are housed in floating oceanariums. The Seal Sanctuary and Open Ocean exhibits comprise two massive oceanariums, amongst the largest in the world, and have underwater tunnels allowing visitors to examine marine life at close quarters. If you make it to Sydney, this should be on your “must do” list.

Pacific Blue Tang (Paracanthurus hepatus) are also known as the regal, palette, or hippo tang, these can get up to just over 12 inches in length, and are the weirdest acting of the tangs for sure. They’re usually very peaceful, but they have a strange habit of wedging themselves into crevices or just laying on their sides when it’s time to go to sleep.

The Sailfin Tang (Zebrasoma veliferum) is a marine reef tang in the fish family Acanthuridae. They may live at water depths of 1 – 60 m (3 – 200 ft) or more. The fish grow to a maximum length of 40 cm (15.8 in). It has an extensive range throughout Oceania, the Indian Ocean, and the South Pacific. They are herbivorous fish specializing in filamentous algae. Though their skin is light beige with stripes, it can turn dark brown under stress. This species is one of the largest members of its genus. The largest scientifically measured sailfin tang was 40.0 cm (15.7 in).

The Yellowtail Surgeonfish (Prionurus punctatus) whose common Spanish name is conchinito punteado, is a species in the family Acanthuridae, the Surgeonfishes, known as cirujanos in Mexico. The distinctive characteristic of the Annulatus or surgeonfish family is the spines, one or more on either side of the tail, which are dangerously sharp. The Yellowtail Surgeonfish have oval compressed (thin) bodies. They are light gray with numerous small black spots covering their head and body and a bright yellow tail. They have a white bar on their head behind their eyes. They have a steep profile with eyes set high on their head and a small mouth placed low on their head with large flattened close-set teeth. A key to identification is the tail base, which has three bony knobs along each side of the middle of the caudal fin base. They have complete lateral lines and their body is covered with small rough scales. They reach a maximum length of 60 cm (24 inches).

The Whitemargin Unicornfish (Naso annulatus) and the Palefin Unicornfish (Naso brevirostris) are two members of the Unicornfish family that differ primarily in the color of their tails. The Whitemargin Unicornfish (Naso annulatus) has a black tail with a white margin while the Palefin Unicornfish (Naso brevirostris) has a white tail, you can see both species in the photograph above. Both are actually a pale tan color but the blue light at the aquarium makes them seem blue. These fish are known as Unicornfish because of a spike/horn that protrudes from its forehead which can grow quite prominently which makes this fish easy to identify and a curious inhabitant of the reef. Unicornfish or Naso family belong to the Tang or Surgeonfish family known as Annulatus. The unicornfishes comprise the genus Naso, which is distinct enough from other surgeonfishes to be placed in its own subfamily: Nasinae. The word Naso in Latin means nose. They can reach a length of 100 cm (3 ft 4 inches), making it one of the largest members of the family Acanthuridae. 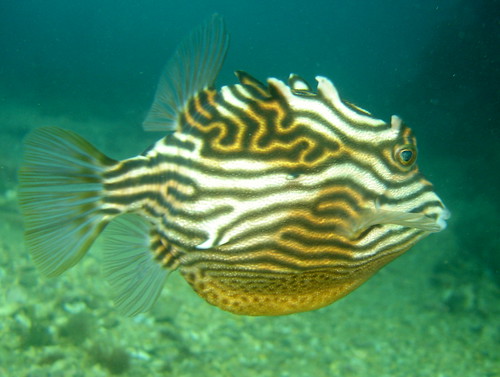 Shaw’s Cowfish (Aracana aurita) also called the striped cowfish or Shaw’s boxfish is a species of boxfish native to the Eastern Indian Ocean. The species was first described by George Shaw in 1798. It is carnivorous and exposes prey by blowing a jet of water onto sediment. The female of this species has an orange bottom while the male is a dotted light tan. The basic difference between the Ornate Cowfish and Shaw’s Cowfish is most easily seen in the different tails.

Yellowtail Fusilier (Caesio cuning, Bloch, 1791) is also known as Red-bellied Fusilier, Redbelly Yellowtail Fusilier, Robust Fusilier, Yellow-tail and Yellowtail. It has a grayish-blue body, the soft portion of the dorsal fin is yellow, as is the top of the caudal peduncle and the caudal fin. The bottom third of the body is often white with a pink-reddish tinge. This gives this species its common name. The species grows to 60 cm in length.

The Golden Trevally, Gnathanodon speciosus (also known as the golden kingfish, banded trevally and king trevally), is a species of large marine fish classified in the jack and horse mackerel family Carangidae, and the only member of the genus Gnathanodon. The golden trevally is widely distributed throughout the tropical and subtropical waters of the Indian and Pacific Oceans, ranging from South Africa in the west to Central America in the east, extending to Japan in the north and Australia in the south. The golden trevally is easily distinguished from its relatives by its fleshy, rubbery lips and unique colouration, which ranges from bright yellow with black bars as a juvenile to a golden-silvery colour as an adult. It is known to grow to 120 cm in length and 15 kg in weight.

The Diagonal-Banded Sweetlips (Plectorhinchus lineatus) is a species of grunt, found in the coral reefs of the western Pacific Ocean, where it occurs at depths from 1 to 35 m (3.3 to 114.8 ft). This species can reach 72 cm (28 in) in length.

The common bluestripe snapper, bluestripe sea perch or blue-line snapper, Lutjanus kasmira, is a species of snapper native to the Indian Ocean from the coast of Africa and the Red Sea to the central Pacific Ocean. It is commercially important and sought as a game fish. The color is probably the most diagnostic feature of the fish, especially when alive or fresh from the water. The back and sides of the fish are bright yellow, with the lower sides and underside of head fading to white. Four bright-blue stripes run longitudinally on the side of the fish, with several faint greyish stripes on lowermost part of sides. All fins are yellow. This species can reach a length of 40 cm (16 in), though most do not exceed 25 cm (9.8 in).

Oplegnathus fasciatus, the barred knifejaw or striped beakfish, is a species of knifejaw native to the northwestern Pacific Ocean though there area a smattering of records from other localities in the eastern Pacific such as Hawaii and Chile. It is an inhabitant of rocky reefs and occurs at depths of from 1 to 10 metres (3.3 to 32.8 ft). This species can reach a length of 80 centimetres (31 in) with the greatest recorded weight for this species of 6.4 kilograms (14 lb). The color pattern consists of light and dark vertical bars from which it derives its name.

The Six Bar Angelfish (Pomacanthus sexstriatus) is alternately referred to as the Sixbanded Angelfish or Six Striped Angelfish. As an adult, the primarily pale-tan body has five nearly evenly-spaced dark brown stripes. The sixth stripe is white and just behind the eye. Dark blue polka-dots cover the entire body, while vibrant sapphire-blue dots cover the caudal fin and back portion of the anal fin. They are common in South Pacific reefs, most commonly the “Great Barrier Reef” of Australia’s North-east coast. The sixbar angelfish can grow to a maximum size of 46 cm (1 1/2 ft) in the ocean, though only around 30 cm (12 inches) in captivity.

Lamarck’s Angelfish (Genicanthus lamarck) is one of the most delicate looking swallowtail angels from the Genicanthus genus. These beautiful fish are almost teardrop-shaped, with long flowing filaments extending off the tail fin of the males. They are a good sized angelfish, reaching up to 9.8 inches (25 cm). Other common names they are known by are quite descriptive including Blackstriped Angelfish and Freckletail Lyretail Angelfish. They lack the vibrant colors found on many angelfish species, but they have a unique beauty of their own created by a strong black and white patterning. It’s pretty white body is contrasted with up to six horizontal black stripes. The top dorsal fin is also black and there’s black spotting to the rear, on the fins and the tail.

Harlequin Tuskfish (Choerodon fasciatus) is a species of wrasse native to the western Pacific Ocean. It grows to a length of 30 cm (12 in). It is a brightly colored marine fish with shades of blue, green, and orange. It has sharp blue teeth. Those specimens found in Australia generally have brighter coloration. This species occurs in the western Pacific Ocean in two separate areas. One is from the Ryukyus to Taiwan and the other is from Queensland, Australia, to New Caledonia. This species inhabits reefs at depths from 5 to 35 m (16 to 115 ft). 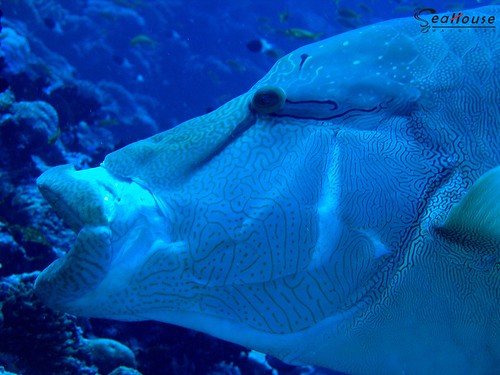 The Humphead Wrasse (Cheilinus undulatus) is a species of wrasse mainly found on coral reefs in the Indo-Pacific region. It is also known as the Māori wrasse, Napoleon wrasse, Napoleon fish and Napoleonfish. Wrasses have protractile mouths, usually with separate jaw teeth that jut outwards. Many species can be readily recognized by their thick lips, the inside of which is sometimes curiously folded, a peculiarity which gave rise the German name of “lip-fishes” (Lippfische.) and the Dutch name of “lipvissen”. The humphead wrasse is the largest living member of the family Labridae, with males reaching 6 ft (2 m) in length, while females rarely exceed about 3 ft (1 m). It has thick, fleshy lips, and a hump, females are red-orange above, and red-orange to white below. Some males grow very large, with one unconfirmed report of a humphead wrasse that was 7.75 ft (2.29 m) long and weighed 420 lbs (190.5 kg). This is a good place to end this post, I hope you enjoyed, please leave a comment.