On our first day in Sydney, we decided to visit the iconic Sydney Opera House and more particularly the group of bars and restaurants on the harbor level one floor down. The area is always crowded both due to the views, the bracing sea air and the variety of bars and restaurants available here. In the words of the bar; “Set amongst the hustle and bustle of the city’s most iconic landmarks, Opera Bar is a Sydney experience that will stay with you for a lifetime. Unveiling a fresh new look in December 2014, the renowned food and beverage destination has been updated with an innovative, modernised offering that showcases local suppliers, provenance, seasonality and sharing.” The horrible experience will stay with you, preventing you from even considering seafood for a while.

Soak in the views and relax in the sunshine. Perched underneath the most famous sails in the world with uninterrupted views of both the famed Harbour Bridge and Sydney Harbour, Opera Kitchen provides some of the most innovative and creative food in Sydney. Dubbed by Australian Gourmet Traveller as “a fantasy food court” when opened in 2010 the regular customers, theatre patrons and tourists alike are treated to a broad array of food styles and cuisine in a relaxed atmosphere. Kenji is a sushi and sashimi restaurant headed by one of Australia’s most celebrated sushi chefs, Kenji Nishinakagawa and it is the centerpiece of Opera Kitchen. To get the full experience, go on a sunny day and sit by the water with a glass of bubbly and order one of Nishinakagawa’s special dishes. Running all the way to the end of January, The Sydney Opera House’s Summerhouse program gives you the opportunity to eat, drink and play outdoors on the Western Broadwalk. You’ll find an alfresco beach bar called The House Eatery By George, as well as The Veuve Clicquot Airstream Pop-Up Bar dishing up seafood and Champagne. Other eateries include the Liana Raines Artisan Pops and Bistro Mozart.

The views of the city and harbor and circular quay are pretty spectacular and the area is packed with the exception of the Opera House Bar. There is a particularly good view of the Sydney Harbor bridge. The bridge is nicknamed “The Coathanger” because of its arch-based design. Furthermore, the bridge is ubiquitously known to Sydneysiders simply as “the Bridge”.

By now you probably realize that this restaurant review is quite different from my previous reviews. It was a lovely day and we asked our hotel if there were any good restaurants near the Opera House and they told us to go to the Opera House Kitchen, next door to the Opera Bar. We mistakenly ended up at the Opera Bar, ordered two beers from an unfriendly bartender and a plate of fresh seafood as seen above. I normally just do not write on bad restaurants but this one is so bad, I decided to make an exception. This a sad story of how to ruin a perfectly delicious batch of fresh seafood, at a price of $150 Australian to be accompanied by fresh rye bread which never came. Before I ordered this little disaster, I went to the bar (for this price no waitress, you go to the bar and order and get a number for your table) and specifically asked if the scallops were cooked. After a lengthy period of time, the bartender came back and assured me the scallops were cooked. I also ordered green beans which were not delivered until two trips to the counter.

When we saw the contents of the “platter” we loved the appearance but the taste was anything but pleasant. First the crab which was over cooked with a pink shell and the meat stuck to the shell. 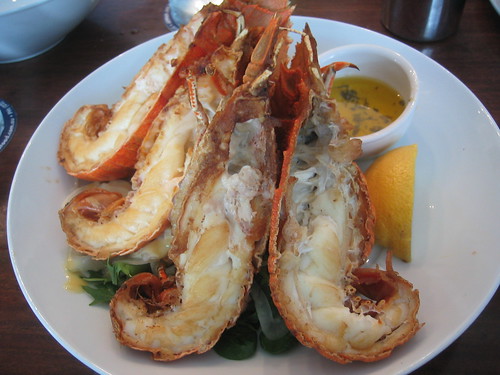 The only edible part was the Bay Bug which was actually delicious. Thenus orientalis is a species of slipper lobster from the Indian and Pacific oceans. The United Nations’ Food and Agriculture Organization prefers the name flathead lobster, while the official Australian name is Bay lobster. In Australia, it is more widely known as the Moreton Bay Bug after Moreton Bay, near Brisbane, Queensland.

The Australian Oysters were old and left a film on my tongue. I was worried I would get sick and refrained from eating the rest. The King Prawns were cooked whole and were not de-veined. The “vein” is actually the digestive system and filled with poop. The larger the shrimp/prawn, the more important it is to remove this nasty bit, unless you like the taste of poop flavored seafood. It taints the flavor of the meat and in my opinion makes them inedible as these prawns were, strike three.

Ceviche is a dish is typically made from fresh raw fish cured/cooked in citrus juices, such as lemon or lime, and spiced with ají or chili peppers. Additional seasonings, such as chopped onions, avacado, tomato, salt, and cilantro, may also be added. I picked the above photo from Cathy because it embodies the fresh, citrusy essence that is ceviche. The “ceviche” at the opera bar had no citrus, diced scallops instead of shrimp/prawns and an astonishing addition of bread crumbs. This was not ceviche, the fish was never cooked by flame or the acid in citrus. Whoever prepared this was completely unaware of any semblance of ceviche, let alone the advertised fish (shrimp), strike four and this is a big one.

The next issue is the raw scallops. I specifically ordered this plate because I was assured the scallops were cooked. Almost nobody I know likes raw scallops, strick five. The last inedible item on the platter was over cooked/ old lobster, strike six. This lobster was so tough, a knife had trouble cutting it. You could play tennis with this lobster. Always be careful ordering 1/2 lobster since its sibling may be a week old or improperly cooked to begin with, strike seven, another big one.

Tripadvisor has a problem separating the Opera Kitchen and Opera Bar. Nonetheless, unless you want a drink and a simple food order like nachos, stay away from the the Opera Bar. The service is slow and reprehensible, the food is inedible and though the view is good, better places are just down the boardwalk.