One of our excursions from the cruise ship involved visiting the set of “The Shire” featured in New Line Cinema’s “The Lord of the Rings” films, directed by New Zealander Peter Jackson. Hobbits are described by JRR Tolkien as an uncomplicated and ancient little people, shy of Big Folk and preferring well-ordered and well-farmed countryside. Hobbiton is one of the places in “The Shire” where the Hobbits live in both “The Lord of the Rings” trilogy and “The Hobbit”. As seen in the films, Hobbits are a merry folk who love nothing better than a good party, preferably with many helpings of food. They have been known to eat at least six meals a day and always have room for more. As someone who has read the “Hobbit” and the “The Lord of the Rings” books and seen the movies, I (and thousands of other people) wanted to see the movie set. New Zealand is crazy for the “Lord of the Rings” films, partly because Peter Jackson is a native and because they were all made in New Zealand. Even Air New Zealand has a safety video with actors from the films.

The farm is an actual farm (1250 acre property), near Matamata, to which the current owners, the Alexanders moved in 1978. Since then it has been farmed as a traditional New Zealand sheep and beef farm with 13,000 sheep and 300 Angus beef cattle. The main sources of income from farming are mutton, wool and beef. It is still farmed the same today and is run by the brothers and their father. The Hobbiton set was built starting in 1999 and was rebuilt in 2011 for the feature films “The Hobbit: An Unexpected Journey”, The Hobbit: The Desolation of Smaug, and “The Hobbit: There and Back Again”. It is now a permanent attraction complete with hobbit holes, gardens, bridge, Mill and “The Green Dragon™ Inn”.

This is the path that Gandolph took as he rode on his cart into Hobbiton in the movies.

These are the houses called “Hobbit Holes” which according to the books and movies, the hobbits called home. Although the set was initially not built to last, the hobbit hole facades having been constructed from untreated timber, ply and polystyrene, it was evident that the location was of interest to tourists. Guided tours of the 5.5 hectares (14 acres) movie set site commenced in 2002 and continue to be provided on a daily basis, the two hour excursion having to be booked in advance. In 2010 the set was rebuilt in a more permanent fashion for The Hobbit: An Unexpected Journey, which began in 2011. Even though there are no interiors to the front facades, the exteriors are amazingly detailed, with fences, mailboxes, items inside the windows, tiny furniture and well tended flowers beds. Chimneys and windows are provided in the grass above the doors completing the illusion, with smoke coming out of the chimneys and items in the pretend windows. The paths are made by actually walking daily over the year prior to filming and those clothes on the clothesline were actually taken down daily and replaced each morning, making a little path to the clothesline. 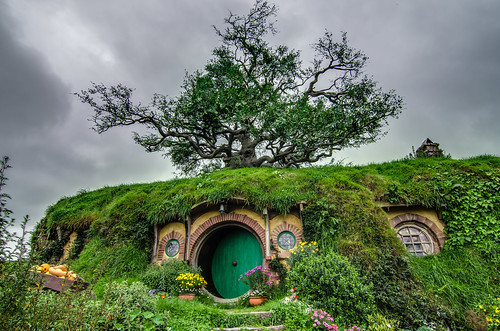 “Bag End” was the home for Bilbo Baggins and was a smial (Hobbit-hole) at the end of Bagshot Row in Hobbiton. It was the home of Bilbo Baggins, afterwards of Frodo Baggins, and then of Samwise Gamgee and his wife Rosie Cotton. The name Bag End name came from the real-life farmhouse in the tiny Worcestershire village of Dormston, in which Tolkien’s aunt lived. Originally a 29-ton oak above Bag End was moved to the set that had been growing near Matamata and which was cut down and recreated on site complete with artificial leaves. For the later Hobbit movies (but earlier in time) a smaller artificial oak tree with painted leaves replaced the larger tree. Set Decorator Alan Lee commented that the location’s hills “looked as though Hobbits had already begun excavations” during preparations for the original movie. Note the bench on which Bilbo is smoking his pipe when he meets Gandolf.

Wheelbarrow with Wooden Box of Fruit from Hobbiton Movie Set

Throughout the site are well established flowers and even a small vegetable garden. Every little detail is included, flowers, stick lattices and even fake fruit in baskets. Even the miniature wheelbarrow is scaled to the presumed size of hobbits.

Wooden Wheel and Wheelbarrow with Grainbags in Hobbiton Movie Set

The details didn’t stop with the wheelbarrow in the garden. Throughout the set are small reminders of everyday life for small people; a little cart for wood and grain, yoke and buckets for getting water, two small beehives and toys, just to name a few. The amount of time, effort and attention to detail is nothing short of incredible. Jackson wrote: “I knew Hobbiton needed to be warm, comfortable and feel lived in. By letting the weeds grow through the cracks and establishing hedges and little gardens a year before filming, we ended up with an incredibly real place, not just a film set”. Lee commented that “it was satisfying to see that it had taken on something of the look of the Devonshire countryside I’d lived in for the past twenty-five years”. The meadow behind the wheel in the last picture is where the parties were held in the films.

Signpost to the Green Dragon in Hobbiton Movie Set

Stone Bridge to the Green Dragon in Hobbiton Movie Set 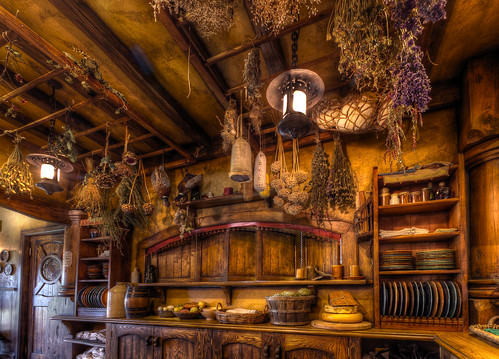 Inside the Green Dragon in Hobbiton. Photo by Amy:)2009 (Flickr)

The New Zealand Army brought in heavy equipment to make 1.5 kilometres (0.93 mi) of road into the site from the nearest highway and initial ground works. Further work included building the facades for 37 hobbit holes and associated gardens and hedges, a mill and double arch stone bridge. Part of the original site had a lake with a long arm that could double as a river and the bridge was built there. Originally the “Green Dragon” pub was just a movie facade but as the tourist trade became more and more popular, the owners of the farm, the Alexanders, decided to recreate the pub as a rest stop after the tour. In 2012 the “Green Dragon” inn (a replica of the Green Dragon that featured in the LOTR and Hobbit trilogies) was opened on the set. There is now also a store selling merchandise and souvenirs adjacent to the cafe and evening events commenced in 2014. Thatch on the pub and mill roofs was made from rushes growing on the farm. Hobbiton is great fun for children and adults as like and tours are available from Rotorura, Auckland, Tauranga and Hamilton. If you are in the area, make plans to visit.