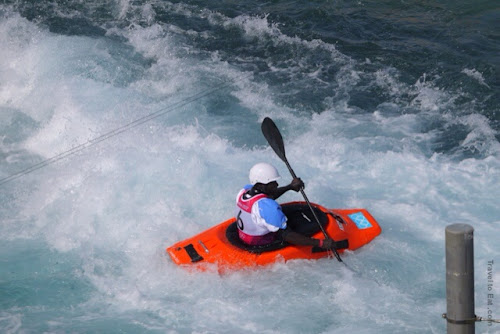 In between the white water men's slalom and the awards ceremony, we were treated to an exhibition of freestyle kayak or playboating. Playboating is a discipline of whitewater kayaking or canoeing where the paddler performs various technical moves in one place (a playspot), as opposed to downriver whitewater canoeing or kayaking where the objective is to travel the length of a section of river (although whitewater canoeists will often stop and play en-route). Specialised canoes or kayaks (boats) known as playboats are often used, but any boat can be used for playing. The moves and tricks are often similar to those performed by snowboarders, surfers or skaters, where the athlete completes spins, flips, turns, etc. With modern playboats it is possible to get the kayak and the paddler completely airborne whilst performing tricks.

Nothing like a video to really show the tricks, so take a look. 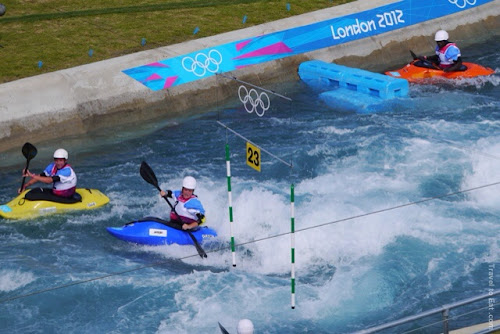 Playspots are typically stationary features on rivers, in particular standing waves (which may be breaking or partially breaking), hydraulic jumps, 'holes' and 'stoppers', where water flows back on itself creating a retentive feature (these are often formed at the bottom of small drops or weirs), or eddy lines (the boundary between slow moving water at the rivers' edge, and faster water) like the spot in the picture above.

Playboating has grown in popularity in recent years due to innovations in boat design. Modern playboats are made from plastic which is much more robust than glass fibre or wood. Playboating is mainly done for fun, but competitions are also popular. Maybe we will see it as an official event at a future Olympics, or maybe as part of a summer X-Games.