I decided to visit Peru and specifically Machu Picchu this holiday season with my step-son Matthew, a long time interest for both of us. Cloud forests are the habitat of some of the planet’s most beautiful birds, colorful tanagers flittering at the tops of the trees, delicate and swift hummingbirds darting about the flowers looking for nectar, trogons, quetzals, and Andean guans, plus several specialist birds that live among bamboo stands and queñual forests. Machu Picchu and the mountains surrounding it are known worldwide for the high number of endemic bird species (that is, birds found nowhere else on the planet). Within the 352,590 hectares protected by the Historic Sanctuary, 406 species have been registered, and it is estimated that some 40 more species could be added to this list, a stunning figure if we take into account that it is such a small area. Tanagers are small to medium-sized birds. Tanagers are restricted to the New World and mainly to the tropics. About 60% of tanagers live in South America, and 30% of these species live in the Andes. Most species are endemic to a relatively small area.

Tanagers are often brightly colored, but some species are black and white. Birds in their first year are often duller or a different color altogether. Males are typically more brightly colored than females. Most tanagers have short, rounded wings. The shape of the bill seems to be linked to the species’ foraging habits. I find the delicate coloring of the Blue and Gray Tanager to be extremely beautiful. There are 13–15 commonly recognized subspecies, differing according to the exact hue of blue of the shoulder patch versus the rest of the plumage; they may be greyish, greenish or purplish-blue, with a lavender, dark blue or whitish shoulder patch.

I saw this bird at the Pakaritampu Hotel in Ollantaytambo, Peru. This is at the top of the Sacred Valley and the site of the Ollantaytambo station of the PeruRail to Machu Picchu along the Urubamba River Valley. Rusty Flowerpiercer is a small tanager of South American mountains. The species is found in forest, edge habitat, and gardens between 1500 and 3000 meters from the coastal mountains of Venezuela south along the Andes to northern Argentina. Males are dark blue gray above and rusty orange below with a narrow black face mask. Females are olive above and whitish below with fine brown streaks. As is typical of flowerpiercers, this bill of this species has an upswept bill with a finely hooked tip, with which it punctures the bases of flowers for the purpose of feeding on nectar.

Golden-Naped Tanager (Tangara ruficervix). The Golden-naped Tanager is one of many colorful members of the speciose genus Tangara. The plumage is mostly turquoise or violet blue (depending on the subspecies) with tawny flanks and belly and a black face mask. On the hindcrown, some subspecies have a golden patch, giving rise to the English name for the species. In other subspecies, this patch is reddish, reflecting the specific epithet ruficervix (“red nape”). The species is found in the central and northern Andes in Colombia, Ecuador, Peru, and Bolivia. Across this distribution, the species varies in plumage, and six subspecies are recognized. In Machu Picchu the subspecies is “Tangara ruficervis inca”. This bird is very fond of fruit and at the Inkaterra Machu Picchu Hotel, they place bananas on sticks to attract this and other bird species.

The male “Thick-Billed Euphonia” is all yellow underneath and dark blue-black above, with yellow forecrown. The female, directly below, is dull yellow green. White marks in the wings of adults can only be seen in flight. The Thick-billed Euphonia is distributed from Costa Rica to southern Amazonia. Despite its name, the size of the bill is of extremely limited use in the identification process. The species is mostly found below 1200 m in secondary woodland, forest borders, and scrubby clearings and gardens. It is typically encountered in pairs or small groups, like most euphonias, and often joins mixed-species flocks, especially those dominated by tanagers. Males are mainly glossy steel blue with a yellow forecrown patch that reaches to just behind the eye, and bright yellow underparts including the throat. Females are, like those of most euphonias, much duller, being olive above and yellow below.

The Rufous-Collared Sparrow (Zonotrichia capensis) is an American sparrow found in a wide range of habitats, often near humans, from the extreme south-east of Mexico to Tierra del Fuego, and on the island of Hispaniola. It is famous for its diverse vocalizations, which have been intensely studied since the 1970s. The Rufous-Collared Sparrow is a very common bird in the Coastal and Andes regions of Peru, it is very adaptable to all types of conditions including those with human-population. It is possible to see them in urban areas, parks and gardens, its main characteristic is its black stripes along the length of its head and tiny crest. The rufous-collared sparrow is 13.5–15 cm (5.3–5.9 in) long and weighs 20–25 g (0.71–0.88 oz). There are between 25 and 29 subspecies. In general, the smaller forms occur in coastal mountains, intermediate birds in the Andes, and large, darker, forms breed on the tepuis or tabletop mountains.

Fairly common where it occurs, Band-Tailed Seedeater ranges along the Andes from northern Colombia to southern Argentina. They inhabit shrubby arid areas below the puna line, particularly around agricultural areas and hedgerows. They forage on the ground or in grasses. Though generally encountered as singles or pairs, they also join mixed-species finch flocks. This small seedeater can be distinguished by the unique white band at the base of the tail feathers. Also note the yellowish bill and white belly. Males are dark overall with rufous undertail coverts, whereas females are pale brown with crisp chest streaking. Their song is a fast, dry, short trill.

The Chiguanco Thrush (Turdus chiguanco) is a sturdy member of the widespread genus Turdus. Two main subspecies exist, with males of the southern race appearing blackish with an obvious orange eye-ring, while northern males are paler brown without an obvious eye-ring. Chiguanco Thrush overlaps in range with Great Thrush and can be visually confused with this larger congener. The Chiguanco Thrush can be found hopping on the ground in arid and agricultural areas.

The Ecuadorian thrush (Turdus maculirostris) is a resident bird found in western South America in western Ecuador and far northwestern Peru. It was formerly considered to be a subspecies of the spectacled thrush (yellow-eyed thrush), Turdus nudigenis, but has a narrower eyering, and is widely separated in range. The habitat of this thrush is woodland, and forest edges and clearings, up to 2000 meters. The Ecuadorian thrush is 21.5 – 23 cm long. It is plain olive-brown above (paler than bare-eyed) and a paler brown below. The throat is brown-streaked off-white, and the lower belly is whitish. It has a narrow yellow eye ring. Sexes are similar, but young birds are flecked above and spotted below.

The Spot-Throated Hummingbird (Leucippus taczanowskii) primarily occurs in northwestern Peru, on the western slope of the Andes and in the Marañon Valley. This species is almost endemic to Peru, but recently has been discovered in extreme southern Ecuador, in the valley of a tributary to the Marañon river. Throughout its range, this hummingbird occupies arid scrub or the edges of dry forests, and feeds on nectar of plants like Agave or banana. Spot-throated Hummingbird is drab in appearance: dull green above and dirty white below, with small dark speckles on the throat but no glittering gorget. Tumbes Hummingbird is similar to Spot-throated Hummingbirds (Leucippus taczanowskii), which also occurs in northwestern Peru, but the species rarely occur together.

The Green and White Hummingbird (Amazilia chinogaster) are fairly common in the western Andes but patchily distributed on east slope. Found in the canopy of humid forest and at forest edge; more closely associated with forest than the very similar White-Bellied Hummingbird (Leucippus viridicauda). Where the two overlap, reportedly is found in more humid sites, with White-bellied locally restricted to drier habitats. Underside of tail uniformly dull bronzy green. Pale undersurface of tail of White-bellied usually visible, with a good view, but may be pale gray (not strikingly white).

The Giant Hummingbird (Patagona gigas) is the largest hummingbird, weighing 18-20 g (6/10 – 7/10 of an ounce); and averaging 21.5 cm (8½ in) in length. Patagona gigas peruviana (Boucard, 1893) is found in the Andes of southwestern Colombia (Nariño) through Ecuador, Peru and Bolivia to extreme northern Chile (Tarapacá) and northwestern Argentina (south to northern Catamarca and Tucumán). The plumage generally is cinnamon-brown or cinnamon-rufous, with a conspicuous whitish rump and base to the tail. The Giant Hummingbird is a conspicuous bird, due both to its large size, and because it occurs in open habitats, such as arid montane scrub, and in cultivated areas with hedgerows. The Giant Hummingbird is fairly common, and is one of the most widespread species of hummingbirds in the Andes, occurring from southern Colombia south to Argentina. 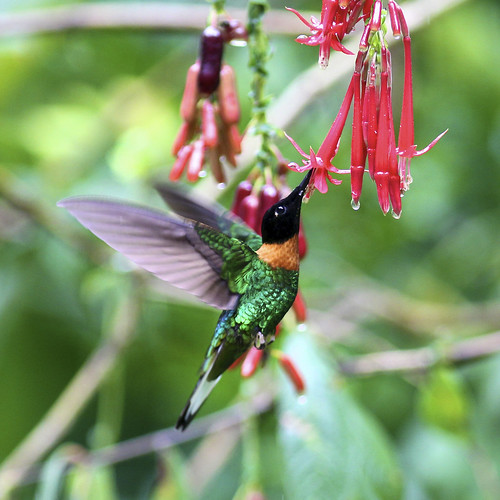 There are over 300 species of hummingbirds in the world. They are native to the Americas, with most species found in South America. Peru has over 118 species of hummingbirds, or colibris, which translates as “Birds of the Sun God.” In Quechua they are known as Q’inti (pronounced Keen-tee). According to one Quechua legend, when all the Earth was suffering from lack of water, and the People, animals and plants were all dying, a tiny hummingbird arose from the last flor de Cantu, (Peru’s state flower, Fuchsia Buxifolia, a favorite of hummingbirds) and implored the God Waitapallana to save the land and its creatures. Even though he died in the process, the hummingbird accomplished his mission, as two great crystal teardrops fell from Waitapallana’s eyes when he saw the devastation on Earth. These tears awoke the serpent, Amaru, who was dreaming at the bottom of a lake, and who, upon shaking his great wings, brought rain back to the Earth.

For birdwatchers, Peru is a true paradise. It is filled with species dwelling in unique and fragile habitats, large migratory birds arriving from the most remote parts of the world and with species that, having disappeared in other countries, flourish in unexplored corners of the country. These giant flocks are a fundamental element in the life cycles of the sea, jungle and Andean lakes. Peru is the birdiest country in the world. Peru ties Colombia with over 1800 species of birds, more than 85% of which are permanent residents. Peru is second only to Brazil in the number of endemic birds and second only to Indonesia in the number of bird species with restricted geographical ranges. Several rainforest lodges in Peru offer superb birding, each with a list of over 550 species. In 1982 a team of birders in Manu in southeastern Peru established the current world record “big day” when they recorded 331 species while only walking and paddling canoes. Peru is home to more than 1,800 bird species, 120 of which are found nowhere else in the world. At least five new species have also been discovered as of this year and are still waiting official scientific description. If you decide to visit Machu Picchu, set aside a little time to see the birds.

Birds of the World: http://carolinabirds.org/HTML/SA_Thrush.htm