A 500-year-old jousting grounds that is now home to the Queen’s household cavalry, Horse Guards Parade was established by Henry VIII and traveled by Charles I on his final night in 1649, a half-century after William Shakespeare wrote, “Uneasy lies the head that wears a crown.” On the clock tower that stands well behind the sand, a black spot at 2 o’clock marks the time that Charles I was fatally dethroned. 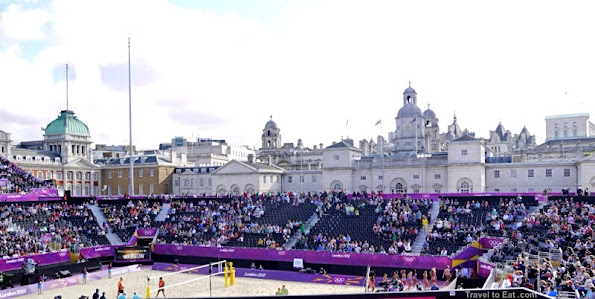 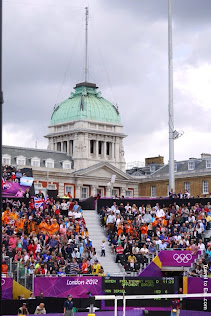 It was pretty amazing that they had transformed this historic place into a beach for the volleyball competitions. In this regal and somewhat somber setting, Olympic organizers constructed a temporary 15,000-seat stadium with the goal of putting on a beach party. They had dancers in bikinis and beach shorts, fans did the rhumba, the wave and even the grounds crew was cheered as it raked the sand to some really eclectic music. They had a DJ that played Celo Green, Beachboys, Katy Perry, Chariots of Fire, Queen, Benny Hill's Yakety Sax and others. Organizers said their goal was to create an beach atmosphere that would energize the crowd and competition and would be really fun. Both the contestants and the crowd agreed. The tickets were the hottest in town and we had a really fun morning with great seats.

Here are a few shots of the cheerleaders and the rakers. They played Benny Hill songs whenever the rakers came out, and the crowd cheered them on.

The day (August 2nd) started out with Latvia in green (Smedins and Plavins) vs Netherlands in orange (Nummerdor and Schuil), Latvia won and went on to get the bronze medal for men's volleyball.

With the music, cheerleaders and beach atmosphere, the crowd was relaxed and ready to cheer for the athletes. There was a wave that went around over 20 times, trying to set a record. Unbelievable as this sounds, it was party time at the beach, in London!

The next match was Brazil in white (Cerutti and Rego) vs Italy in blue (Nicolai an Lupo), Brazil won and went on to get the silver medal for the men's beach volleyball.

We got a break after the men's competitions and got a chance to checkout the fans and more cheerleaders dancing and the announcer keeping the crowd pumped up.

We saw two women's teams, Netherlands in orange (Van Ierse and Keizer) vs Argentina in blue (Gallay and Zonta), the Netherlands won.

The next match was Italy (Menegatti and Cicolari) vs Canada in red (Martin and Lessard), Italy in blue won.

As the competition ended and the cheerleaders left by one of bleacher isles, both Lisa and I remarked how great the morning had been.